“Wow, these quotes get annoying.”

We have been struggling to get away from the Mexico coast. There isn't much wind and what wind we've had has been out of the West or North West, which makes going west difficult. So we've been going SW. After a lot of frustration we have finally started to get some wind. In fact we've been sailing since 7 am this morning and right now are doing 5.1 knots at 253 degrees true.

The wind has finally become more favorable, but is still quite variable. As we move further offshore we expect to see more consistant winds with some more northerly component.

Michael my crew mate has been doing a great job and his spirits are high -- a very key item. Jordan too is doing well. She sleeps with us on our off watch and she has even been playing a little.

Hopefully we are out of the worst part of the no wind zone. Best of all we are finally out of all the giant shipping vessels. Having AIS on board for the first time has taken the horror of dodging ships in the dark. It's something we should have splurged for long ago.

We are starting our multi-week trip to Hawaii today. Wish us fair winds and following seas. We'll try to report from time to time as we travel with our position. We will also be reporting into pacific seafarer's net as we head along.

After two years in the marina we are back on the loose.  We did a lot of traveling, hiking, biking, and boat work during that time.  But we never felt the stress leave until we started sailing again, knowing that the dock was behind us.  Sure unlimited power, water and internet are nice, but they chain you down too.

We were both surprised at how quickly we fell back into our routines during our passage.  After only a few hours we were in the groove again.  The seas were really churned up from a week long blow up north making the trip a sloppy ride.  But the boat did great.  When you make as many changes as we have to all the systems on the boat we were worried what wouldn't work or what would break.  But it was a good test and everything went very well.

Now we are in the Puerto Vallarta Area (La Cruz) and naturally there are things we still need to cross off the list, but it feels like we are free.

Here's us at anchor...can you see Jordan peaking out? 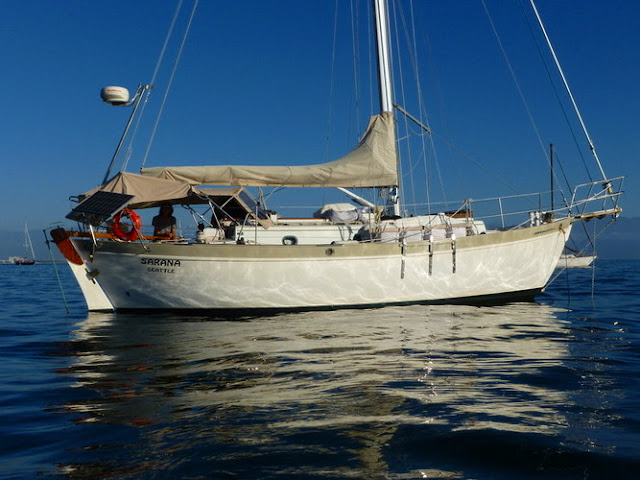 It's hard to believe how much you have to destroy when rebuilding. We've been crawling in tight spaces and scraping our knuckles in order to replace and reseal all the hardware we took off. Now we have one side of the boat done with new chain plates, 3 new shrouds (wires that hold up the mast) and a new paint job. 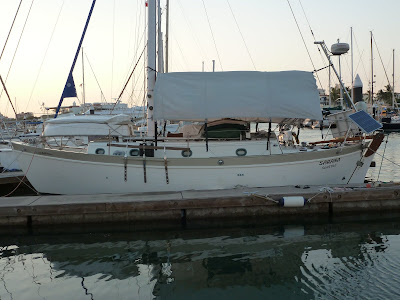 Now we need to do the other side, 5 more shrouds, and 5 more chain plates.   Tomorrow we are going to remove the hardest parts the aft chain plates and the stern pulpit.

After that we are going to send them out for fabrication and switch gears to work on the RV so we can get the process of selling it started.

All pretty boring stuff.  One exciting thing is the beer that we made turned out FANTASTIC.  Something so good has never come from a Pacifico Bottle before (we used Pacifico Bottles to bottle it).

Wasps, bees, water pumps, what else? Progress seems glacial at times and weird things keep interrupting us like a plague of wasps, then a broken water pump and this morning a swarm of bees tried to invade our boat. What's the deal?

We replaced the lifelines and have now started on the standing rigging piece by piece. We decided to get new chain plates fabricated to replace the 35 year old originals. While a few of them are getting fabricated we are working on refinishing the cap rail (clean, sand, seal, varnish) and then painting the whale stripe (the large brown stripe in the photo) and cap rail with paint. Turn the boat around and repeat.

After a week of chasing down machinists I finally got someone started on the parts. You can see two of the missing straps of metal on the side of our boat in the photo.

Why are there strips of blue tape on the hull? It was shockingly unnerving having light shining through the walls of our boat on the inside, so I put blue tape over them to give the illusion of normality. 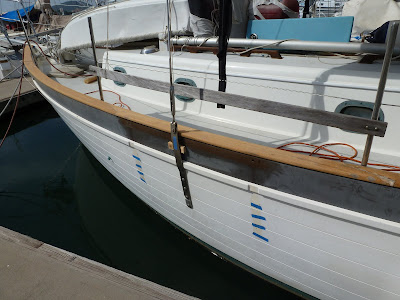 Hopefully the locusts stay away long enough for us to finish.

We're getting caught up on our photos. Here's what happened in NY, WV, KY, MO, and CO!

We had a fabulous time visiting Eric's sister Kate and her husband Michael and exploring NYC and it's multitude of museums, often times by bicycle. But alas, after a month, it was time for us to start our Southwest-ward trek back to the boat.

After 2 months of urban exploring (Maryland to NY), we were ready to lose ourselves once again in trees and mountains, so we hightailed it to the Appalachians of West Virginia. Enroute, we crossed paths with a large thunderstorm making it's way to the east coast – the horizontal rain brought visibility down to about 2 feet so we had to pull to the side, along with thousands of other motorists. Since we were heading the opposite direction from the storm, the worst of it was relatively short lived, and we were back on the road after about 1/2 hour. Unfortunately though, this was just the start of about a week of stormy weather plaguing the entire eastern section of the country. And boy did it rain in the mountains of West Virginia making our hikes quite soggy (trails turning into raging creeks), and difficult to take many photos. Which was really too bad, as the Cranberry Wilderness area is quite beautiful. But, we made the most of the sunny breaks and managed to take some photos of our camping area and it's adjacent river.

On our way to the Wilderness, we passed by the National Radio Astronomy Observatory, home to the Robert C. Byrd Green Bank Telescope, with a 2.3 acre (7854 sq. meters) dish area, making it the largest fully steerable dish in the world (see photo). We just had to stop and check out the museum, and take the tour thru the lush property which holds over 30 different radio telescopes. It was an unexpected and fascinating diversion, literally out in the middle of nowhere (hence the reason it's located there, with little noise interference).

Leaving the Appalachians of WV, we decided to drive through the New River Gorge National River on our way into Kentucky. This was an area heavily mined for coal at the turn of the century, and preserved for it's natural beauty once the mines were abandoned. Once thru this park, we ended up on a winding narrow road that led past small coal mining towns butted up against steep lush hills with a beautiful rushing river on the other side. We really had no idea how picturesque this coal mining area would be – alas, it was pouring rain, so there's no photos.

We started feeling the heat more and more as we descended out of the mountains. By the time we made it into Kentucky, our top priorities for camping sites became shade, and a cool place to swim. We found them in the Daniel Boone National Forest, where we biked a great single track trail thru the forest for a refreshing dip in Laurel River Lake, and the Land Between the Lakes National Recreation Area on the Tennessee border. Due to the hot weather and lack of interesting and maintained trails, we didn't linger long in Kentucky and decided to try our luck in the Missouri Ozarks. We were also disappointed in the selection of trails available in the Mark Twain National Forest, and with temps over 100F, decided to explore the Ozark Nat'l Scenic Riverway instead. It turned out to be a good choice with beautiful river scenery, and most importantly easy access to cool slow moving water.

After several days of river soaking, we'd had enough of the extreme heat and decided to make a beeline for the Rockies. Our first stop in Colorado was Ft. Collins to visit our old cruising friend, Ryan, who used to sail on “Godspeed” and later “Sonrisa”. Upon sailing his boat back to Seattle, he enrolled in a culinary school, and to make a long story short, sold his boat and moved back to CO where he converted an old Avion trailer into an Asian Mobile Eatery called “Umami”. Ryan serves up some very tasty Asian fusion treats, and is doing well in a city that has just started to embrace the food truck culture (especially at the craft breweries in the area). We hiked our first Rockies' trail with Ryan in the Horsetooth Mountain State Park right behind his house.

From Ft. Collins, we drove thru the Roosevelt National Forest, which was heavily hit by fires this summer, along the Poudre Canyon Road. A forest ranger recommended the Rawah Wilderness area for good hiking and dispersed camping which we thoroughly enjoyed with spectacular mountain views and even a couple river crossings. We also discovered why this area is famous for moose with several moose sightings including the rambunctious calf Eric was able to capture on video and photo.

Next up, our month long travels on the West side of the Rockies, starting in Steamboat Springs.

The moose is loose video

We captured a rare moment between a mother and her calf while travelling in Colorado. Like teens everywhere, they want to do their own thing.

We went MIA in Colorado for the past month. Did you know Colorado has over 54 peaks over 14,000 feet? It makes our Mt. Rainier seem a bit lonely. We hiked over 100 miles in the past month and most of that at elevations between 8,500 and 12,000 feet. Access to the internet has been scarce in these wild places and we've collected hundreds of photos and videos we want to post. (Not to mention all the photos from places we went after New York and before Colorado). Perhaps we'll find good internet access in a few weeks and get it all sorted out. Until then, yes moms we are still alive. We are in Moab, UT where we plan to do a lot of mountain biking on their famous slick-rock trails. Then we are going to hike the Arches and Canyon Lands parks. Stay tuned.

New York City was a blast! We saw Yellow Ostrich play 3 times which was really amazing. Their songs still keep getting suck in our heads (listen to a few on the internet to see what we mean). Our 4 weeks in NYC gave us time to eat our way though some of the hidden ethnic food carts and restaurants. We soaked in culture at several museums, rode our MFB's (bicycles) all over the city, and spent time with Kate and Michael.

We had a big picnic to celebrate Fathers Day for my grandfather who is almost 91. Lots of aunts, uncles, cousins and friends all came out for the nice weather and lots of food (yes, we snuck in a vegan cake on them...shhhh). It was great fun to see everyone again after all this time!