Yesterday we had to rebuild our raw water pump because it had been leaking and I also noticed our fuel filter was allowing air to leak into the fuel supply. Luckily our fuel system is self bleeding or the air would have caused our engine to die -- probably at the worst possible time.

Lucky me, I had spares for everything that was broken (including a new racor bowl and drain plug). As I was tearing things apart I found both engine drive belts needed to be replaced too! Well I have a few belts too fortunately. 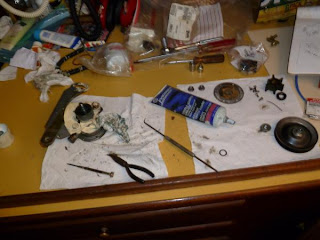 To prove the cliche "Cruising is doing boat maintenance in exotic places" wrong we decided to see what was here in Puerto Marques and the nearby Acapulco suburb, Diamante (Diamond). The beach here is nice with lots of friendly people and latino hipsters (even though we are outside of Acapulco by a few miles this place still has an urban flavor). We walked about 1.5 miles to the diamond town (a heavily yuppified area) and had a pleasant shock. They had built a new Walmart, Office Depot, Sam's Club, Costco, Mega Super and a mall with a multiplex cinema. We've been wanting to see the latest Harry Potter film but it wasn't playing in English in Huatulco. Low and behold, this cinema had 1 theater playing it in English at an 11:30am matinee! Holy crap!

For those of you surrounded by 10 million consumer options, you're probably wondering what the big deal is - but for us it was an amazing treat. While we impatiently waited for 11:30 am, we scored some delicious SOPES (de Rajas (grilled poblanos peppers and onions) y de Champinones) in the food court. Then we paid our $2.80 each and had the entire theater to ourselves.

In our opinion, this film was well done and finally stuck pretty closely to the book. And they really got creative with the tale of the Deathly Hallows -- brilliant stuff. Of course you've probably seen it and know this.

Anyway our heads are still reeling from the surprise sensory overload of seeing the film on the big screen. Then we did some shopping and found Dr. Pepper and real Ginger Ale! Truly a mind blowing day at Diamante.

And here's the thing: no one really even knows about this place. The guidebooks have the anchorage location wrong and from reading what both books have to say, it appears they've never really been here. The government is rebuilding the town waterfront with new beach restaurants and a public pier. It is going to be great when it's all done. On the other side of the cove, it's all natural jungle complete with the songs of various birds. The anchorage is very calm -- probably the best we've been to in southern Mexico and the provisioning is fantastic too. Not to mention English movies on the big screen! LIFE IS GOOD. 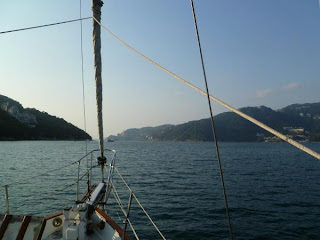