Well, here we are and change is ever present. The marina recently changed owners from one government tourism branch to a port authority branch. Good old mexican tax dollars seem to be pouring in because they are building like mad. Unfortunately we are right in the middle of it and covered with dirt. Notice the large rock pile at the top of our ramp. And since we are in the cheap area there is no running water or power for cleaning up. Oh the glory of it all. 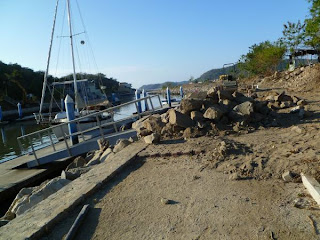 Just to add to the image. This photo shows our walk to the civilized section of the marina where there is power, water and wifi internet. That dirt is the fine powered kind that turns into muck in the rainy season and choking brown fog during the dry season. The rock piles come and go via dump truck and backhoe and you can imagine the clouds of dirt that engulf our boat. The small building in the background used to be the old marina office, but now it has become the computer room for the people who can't get wifi on the boat (the canal dwellers like us), but bring something to sit on. It is also the shower room (outdoor showers) and the public bathroom. 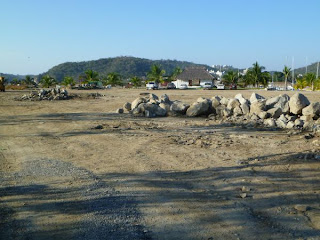 They have added two new finger piers in a void that many years ago I tried unsuccessfully to talk the harbor master into letting us anchor in (imagine the cost savings...haha). They have also completely reinforced the sea wall all around the marina. And they build a "mega yacht" area that consists of a long concrete wall with no floating ties. I don't know anyone with a mega yacht, but I doubt they are going to tie to a concrete wall (with black rubber strips) that they are going to rub against in the serge and rise and fall of the tides. 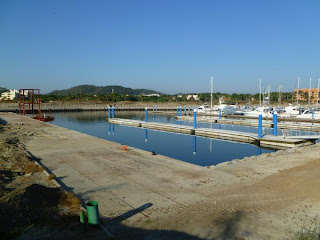 Here's a better shot of the long wall on the far side for the richies. They installed a gate and a fence to keep the public away from the money people. I wonder how the tax payers feel about paying for that? 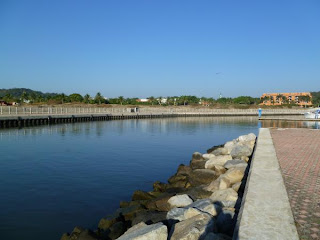 What else can I say? Oh, they have also been dredging the entrance and the area along the mega-yacht wall. So if you're headed here, keep an eye out for the added obstacles in the middle of the channel entrance. I don't think it is lit at night either. The sunlight was bad for this photo, but in it they have ropes and floats blocking the right side and they've added temporary pilings in the middle of the channel to assist in the dredging work. 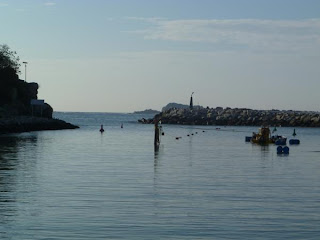 Of course I'm a bit negative because we are ready to get going. This is a very pretty area and we have beautiful egrets, white herons, and several cool birds I don't recognize around us. The town is fantastic and the people are all friendly and quick to chat up a conversation or provide directions to some obscure shop that has just the thing we need.

It's a fun town and the marina rates in our cheap area have been good despite the extra challenges. (FYI--If you choose to stay in the cheap area, they have upped the short-term rates to prevent people from doing a quick in and out.)

This being the only the second dock we have been at in 3 years we don't have much of a recent comparison. It certainly was good for Sarana (and many other boats) during the hurricane season. However the perpetual travelers in us are itching to go again.