“You have to believe in something; I believe I'll have a beer.”

WTM breaks down but we found the wave cave

We left Huatulco and found a nice beach town called Zipolite. Within yards of the beach we parked our beast and took the cat for a walk. It was a beautiful place with powderlike sand. We spent a quiet night there and an early morning fixing stuff on the RV.

Our goal was to make it to another beach on the other side of Acapulco. But after leaving the town of Santiago Pinotepa Nacional our engine acted up. We noticed a relay had been clicking on and off about every 5 seconds and I tried to locate it, but with no luck. Outside of town in the middle of nowhere the engine died.

Totally dead, no spark, no go. Fortuantely this didn`t happen on a blind curve. I was able to coast to the only pull-out for miles. I still couldn`t find the problem so we let it cool off and it started fine. So we turned around to buy some parts to jumper in a relay. After getting the parts we went to get some cash but the ATM machine ATE my card!! The bank couldn`t do anything until the next morning. So after watching the military raid a hotel and block off the street, then getting kicked out of a Pemex (mexican gas station which normally lets people park overnight) by a rude old dude, we finally found another Pemex whose guard even offered to keep an eye on us during the night. We waited most of the next day to get our card back only to discover it was EXPIRED. It would have been nice if the machine had at least told us why it kept our card.

On the way past Acapulco the engine clicking wouldn`t stop. Fearing another engine failure on a blind curve in the middle of nowhere, we sucked it up and skipped the bypass and plunged headlong into the road nightmare that is downtown Acapulco. Acapulco has become the slum town of Mexico. There is no other way to say it. We found a little RV park that was totally run down but was right near all the auto repair places. The next day we found this guy in an dusty lot and a small cinder block room with "Electrico" on the side. Not holding out much hope, we pulled in.

The owner wanted to buy our RV, but his mechanic and I ignored him as we poured over the engine, which refused to reproduce the problem. At one point I got so fed up I started moving and pulling things randomly until a large spark shot out of something and the CLICK of the ignition coil relay caused me to excitedly shout "Eso es la sonida!" We traced it to a bad diode that was shorting to ground and killing the power to the ignition relay. I was shocked when the mechanic reappeared 10 seconds later from behind the concrete hovel with a brand new version of this chassis mounted toyota diode. $22 later we were back on the road and better than new.

Our next stop was Playa Linda which is a spot we surfed 3 years ago with some other boats just outside of Ixtapa. It was so quiet and relaxing parked next to the surf. We slept hard knowing the WTM was running well again. 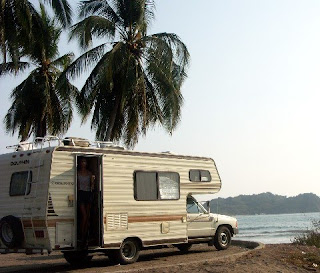 The next day we wound our way up the coast to a funky little RV park/restaurant/mini-store on the beach. We were the only ones there.... Jordan went bonko in the bushes and ended up covered in stickers.

So today we decided to go a short ways to Maruata. Wow is it beautiful. We are parked right by the main beach (i.e. free) with fantasic sand, clear water, cliffs and reefs all around. 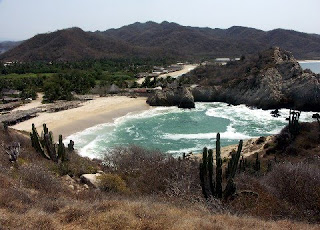 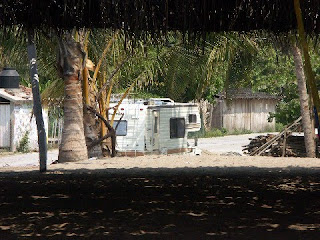 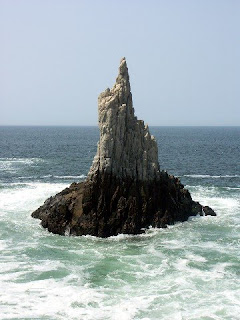 Then we discovered the WAVE CAVE. We`ve probably seen thousands of caves and cliffs and blowholes, but the wave cave is cooler. From this hole in the wall comes spouting rushing waves. It creates its own little beach. See for yourself: